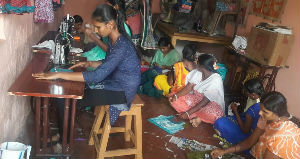 Early in the history of CRHD it was decided to open a Sewing Centre in the city of Raichur. The aim would be to empower women by teaching them sewing skills which would enable them to earn money for their families.

Mrs Y Daniel, already an experienced seamstress, undertook a government training course which gave her a diploma and a qualification to teach. Initially the training centre was based in Mrs Daniel’s own home. Basic treadle machines were purchased and also a machine which was programmed for machine embroidery. Later the project moved to rented premises, an area of about 240 square feet without electricity, a concrete ‘box’, not large but adequate. 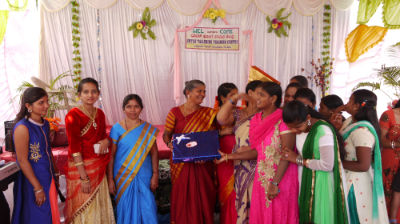 As the premises were on the edge of the city the first clients were local women, mainly young married Muslim girls from a very impoverished back-ground. The courses offered were basic sewing, advanced sewing, pattern making and umbrella making, hand and machine embroidery. Literacy classes were introduced later.

Those taking and completing the courses gained certificates. The completion of several courses enabled some women to qualify for a free sewing machine offered by the government.

Women were able to testify in a very moving way as to how taking these courses had changed their lives as they were able to sell their skills and earn money to pay for their children’s schooling and help with family expenses.  In the initial stages of the project it was possible to offer free training but now a very small amount is charged to help defray expenses.  A second centre nearer the centre of the city was opened in 2011 and has flourished.

Mrs Daniel has several well qualified assistants and over 500 women have now completed courses.  Apart from being an excellent tutor Mrs Daniel is like a mother to these young women and a shining example. She witnesses to her Christian faith without proselytising and she herself was comforted by the love and support she was offered when her husband Mr Daniel died. To be a widow without children in Indian society is very difficult and Mrs Daniel has shown that such a situation can be coped with and that a fulfilling life can still be achieved. 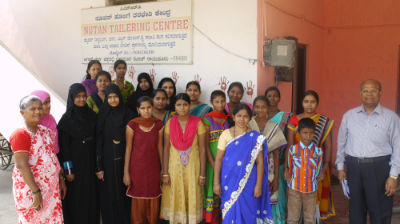 In 2011, in response to a request from the India Committee of CRHD it was decided to employ a part-time health worker who would attend the centres regularly. The aim would be create a safe environment where women could discuss general issues relating to health and welfare and to offer information about AIDS, contraception and sexual issues in general. This sort of work is rare in Indian society and the funding for it was realised thanks to some generous support from Women’s Network in Bristol. It is hoped that the project will extend to the village and will also allow women to bring their children for general checkups. To view our health care programme, please click here.